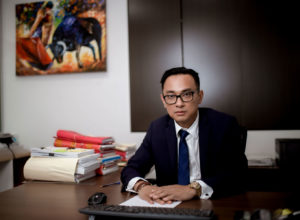 Vinh Duong is our Director and Principal Lawyer (LPN: 5510859). He is an Accredited Specialist in Immigration Law. He is also a Fellow of the Chartered Institute of Arbitrators (CIArb) since 2021.

“Firstly, I wish to pay tribute to my mentor, Janice Vu for guiding me into the legal profession. Without her guidance, I would not be an Accredited Specialist in Immigration Law and a Fellow of the Chartered Institute of Arbitrators today.

In both my personal and professional life, I uphold the values of loyalty, honesty, friendship, respect, and integrity. These principles are the foundations of all our law firm’s interactions and service to our clients and their cases. It is our responsibility and pride to achieve the best possible result in your case in a timely manner.”

Every journey begins with a single step, and Vinh Duong begins his adventure at his parents’ business. Vinh Duong assisted his parents with their Asian Groceries family’s business in South Australia while studying at the University of Adelaide. His responsibilities back then included, but were not limited to:

His proudest achievement was assisting his parents in purchasing a dead business at a very low price and turning it into a profitable business within a year. Before leaving South Australia to pursue his legal career, Vinh Duong backed his parents in negotiating the purchase of a commercial complex, where his parents operated their business.

Thanks to those business experiences, Vinh Duong has built up and had a good understanding of how a business operates at a very young age. He has acquired the following skills which have helped nurture him into the person that he has become today:

Before establishing Vinh Duong & Associates, he had worked in many law firms both in South Australia and New South Wales, practicing in the following areas including but not limited to:

The experiences that he had gained in several law firms, even in the short period, provided him with insight and understanding of the various sectors of law.

Towards the end of 2002, Vinh Duong joined Janice Vu & Associates Law firm. Throughout his legal career, he developed a special interest in Immigration Law and focused his practice on this area. He has represented many clients in Immigration applications to the Department of Immigration and Border Protection, as well as appeals to the Migration Review Tribunal and AAT. Vinh Duong has extensive expertise representing clients in the Federal Magistrate Court and even the Federal Court. He is dedicated to his clients and enthusiastic about his work. He strives for the greatest possible outcomes for his clients at all times. As a result, he has earned a reputation, and word of mouth has attracted more and more clients over time to our firm.

In 2011, his mentor, Janice Vu, decided to return to study and did a Master’s degree in Law. She made the decision to hand over the business to Vinh Duong. Vinh Duong & Associates Lawyers was founded on 1 January 2011, and since then, Vinh Duong has served as the firm’s Director and Principal Lawyer.